Thank you for having me on your blog! I’m happy to be here today to let your readers know about my newest release, ‘Charmed’, from my series, The Glorious Guild of Lady Windsurfer. One of the questions I get asked when I do interviews is if I do research on my stories. For ‘Charmed’ I did.
The first bit of research I did was on weapons. I had to figure out different guns and knives and see what I could do in terms of blasters. Then I looked up what kind of snakes live in the area my story is set in and what would happen if one was bit. Did you know a decapitated snake head can still bite a person, even minutes after getting its head lopped off? (http://www.livescience.com/47626-severed-snake-head-can-still-bite.html) For the bonding ritual, I did research on ‘blood brother’ type blood rituals. Some interesting stuff out there!

Blurb
Charm knows how to get what she wants, but when faced with opposition, she tends to make bad choices. After a plan to subdue a Rullix goes wrong, Charm forces her way into two Auraths’ lives. They have a ship after all and can help her escape Earth and the Rullix.
Step-brothers, Thorne and Wade, are discussing Earth and mates when Charm dives into their presence. Each man believes her to be the partner he’s been waiting for. The men allow her passage in their spaceship, but are shot down by the Rullix and crash in a canyon.
Charm finds them sanctuary, yet even in the middle of nowhere, she still gets into trouble. Thorne and Wade have to figure out how to travel to Aurath before Charm’s bad choices lead to their demise.

Excerpt
Now, almost fifteen years later he had the rank of Captain, along with Wade, and they both were looking to be promoted to Commander. No one was going to call him weak. Not even his family.
“As you know, I have always had balls. I just choose not to show them all the time. Do not challenge me here.” Most times their relationship was just like this—volatile—but when the serene, quiet moments happened, he could almost hear Wade’s soul and knew the wealth of love that resided there for him and the family.
Wade slapped him on the back. Hard. Thorne shot a quick glare at him. Wade chuckled. “I am messing with you. You have been wound very tight lately. More than usual. What weighs on your mind?”
Thorne folded the paper and laid it beside his half eaten plate of food, realizing he’d lost his appetite during their conversation. “As you pointed out earlier, I ‘have’ said many times I have felt our mates would appear, and yes, we are still mateless.” He picked up the knife, flipped it and then moved his wrist to and fro, mindlessly practicing weapon control. The metal glinted in the sunlight sending bright beams into the crowd aimlessly milling about.
“I know I have sensed one before in New York City, in Florida, here in Las Vegas. So why have we not met?” Thorne jerked his head up. A slow sizzle spread through him, and his gut clenched. He looked out into the throng of unkempt people passing by the restaurant. The sizzle quickened, reminding him of the time he’d first made contact with his stepbrother. Wide eyed and with an open mouth, he stared at Wade.
Wade’s stern countenance turned to one of concern. “Thorne? What is it?”
Before he could reply, a barefoot woman, clad in rags across her breasts and in a short, matching skirt, crashed through the line of people and headed straight for them.

Author Bio
Jacey Holbrand believes love comes in all forms and should be celebrated. She’s committed to her muse and writing so she can share those kinds of stories with readers.
‘Hot days. Sexy nights. Come play in her world.’
Jacey loves to hear from readers! eMail her: JaceyHolbrand@gmail.com

Book 1 in the series is ‘The Gathering’. Buy it at http://www.evernightpublishing.com/the-gathering-by-jacey-holbrand/
at January 31, 2015 No comments: Links to this post

Bedtime stories that will heat up your night.

We walked out of the restaurant and down the hall into the main lobby of the hotel, my eyes scanning for any photographers. I really didn't want my face all over the tabloids tomorrow.

"I had a great time meeting you today. So, what now?" Slade asked as he looked deep into my eyes.

"I don't know," I whispered. I didn't want the afternoon to end.

"I don't want to leave you just yet, Jewel," he whispered in a sexy tone.

I bit my bottom lip and started to fidget. "Then don't." I took a deep breath, trying to figure out everything that was racing through my head. "Would you like to come to my suite for a drink, maybe?" I couldn't believe I'd just asked him that, but I knew what I wanted, and at the moment it was him.

We stepped in the elevator and the doors closed. We were alone. Before I could process what I was doing I was kissing him. The simple kiss set all the nerves in my body on fire. The elevator stopped and I pulled away as the doors opened.

"This is my floor," I said breathlessly.

We walked into the hallway in silence. The tension between us was so strong. We reached my suite and I swiped my card to open the door. I could feel his gaze on me, it was making me nervous and turning me on at the same time. My stomach was in knots as I walked in, but not the bad kind of knots, the I-want-to-jump-him kind of knots. He was making me crazy. I truly just wanted to go with what I was feeling. I was so attracted to him. As soon as the door shut Slade pushed me against the wall and started kissing me.

"Jewel, you are so alluring," he said as he kissed my neck.

"Slade," I moaned. I could feel how hard he was as he pressed harder into me.

"Yes!" My heart was pounding in my chest as I led him to the bed. His urgent lips were on mine. He unzipped my sundress and it fell to the floor, leaving me in only a black lace bra and thong.

"So sexy," he whispered in my ear as he kissed my neck.

Tamaria Soana is middle aged, but just feels her life has begun. She writes sexy contemporary romance stories that always end with a ‘happily ever after’. Growing up she loved to read and make up new places in her head to escape to. In her late teens she began writing short stories and poetry; it wasn’t until her late thirties before she began to spin a full story. She’s married and a stay-at-home-mom of two beautiful young girls, they reside in Western New York. Cuddling up with a good book under an electric throw is her way to escape the cold Buffalo nights.

Tamaria is giving away a Bath & Body Works Morocco Orchid & Pink Amber Bath Set. US only!

Bad For you Trilogy by Kenya Wright 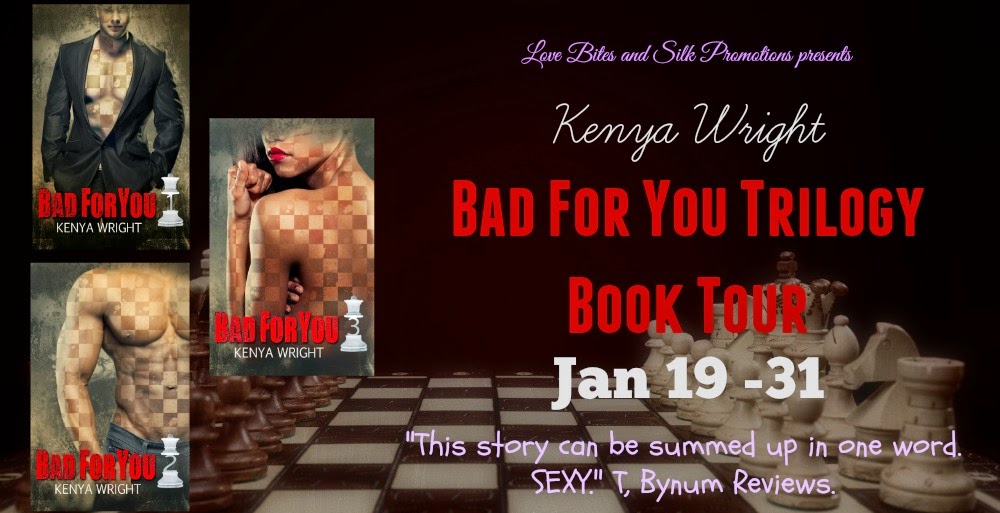 "This story can be summed up in one word. SEXY." T, Bynum Reviews.

This chess board is different than a normal one. Instead of a king and queen, we have a Killer and Survivor. Where knights and bishops should be, there are Strippers and Gangsters. Yet, in this game of SEX and DECEPTION, blood stains and life, an intense love grows in the most unusual places, leaving all of the players to consider dropping their guns and rethink why they started the battle in the first place. Welcome to Mid Week Tease. Thanks to the lovely and talented Sandra Bunino, who created this weekly fun, myself and other author friends post a little something for you, the readers, from some of our published works, up-and-coming releases, and WIP (Works in Progress).

Meet the cast of my upcoming February 6th release of Rise of the Lost Prince.

They fight to protect those who would never welcome them into the human world...

Petúr is the leader of the Lost Boys – A Seelie Sidhe Fae who can fly and is an all around badass. Expert in combat.

Wyndi Darlinghart  – Human. Her father is the rich business tycoon Cromwell Darlingheart who owns the ruins of the abandoned seaside amusement park Neverland.

Bell – A Demi-Fae who can fly, glamour people, and can transform into a bird or butterfly.

Vibe – A Seelie Sidhe Fae of the order of Delphi. He is an empath with the ability to change someone’s thoughts/moods.

Dash- A Seelie Sidhe Fae. He is a teleporter who can teleport people and objects.

Tera & Byte are The Techno Twins – Part Fae and part something not yet known. They can hack computers with the power of their mind and make tech weapons.

Vapor – An elemental of water. An Undine. He can pull water particles from the atmosphere and dissolve to become a murky fog.

Grapple the Dark – Grapple -  a.k.a. Grappling Hook - Unseelie Sidhe Fae. He was a healer who was banished from the Royal Court for his dark dabbling after he took a demoness for a lover. He created darkling’s—the ghoulish magical offspring with a demon who can step into a human’s body and feed until they take the human soul.

Kros – Unseelie Sidhe Fae – The only Fae-born son of Grapple who was transformed into a darkling and who can take darkling form and Fae form.

Ariette – Demoness of nightmares and shadows.