Rose Bartlett couldn’t have been more thrilled about her new position at Mount Beacon Hospital. She was working toward her dream and nothing could stand in her way. She didn’t want or need a man in her life. Until she met him…
Bobby Alterman had worked at the hospital for ten years and never once had he shown anything more than a passing interest in any woman, until he met her…
Fiery passion explodes between these two unsuspecting people, taking them by surprise and bringing their lives crashing together.
Meanwhile, a serial killer is making all of West Virginia look over their shoulders as bodies begin piling up. Bobby wants to protect Rose, but she’s more stubborn than he is. She isn’t afraid and refuses to play by his rules. Can this unsuspecting pair survive when the killer strikes too close to home?
at June 30, 2018 No comments: Links to this post

I'm late showing off this beauty here on my blog, but better late than never!

COMING SOON FROM
LSJ Romance
at June 29, 2018 No comments: Links to this post

Email ThisBlogThis!Share to TwitterShare to FacebookShare to Pinterest
Labels: Beneath the Beautiful, Cover Reveal, LSJ Romance

The authors of this collection are giving away a Kindle Fire with Alexa. There will be a chance to enter every day so be sure to follow the tour to learn more about each book and enter for your chance to win this awesome prize! You may find those locations here.

About The Billionaire's Club: High stakes, risk takers, and power-wielding billionaires. This set will take you on a ride of romance, seduction, and games of wealth and fortune. Find out what happens when these powerful men meet their match. 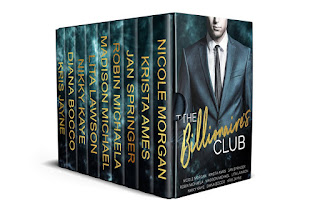 Featuring: Playing with His Heart by Krista Ames Will playing with his heart break hers?

When you’re a Spencer, sometimes the price can be higher than you’re willing to pay.

The Billionaire Boyfriend by Jan Springer

Lily finds pleasure in the arms of two sexy billionaires.

A jilted bride’s best revenge is finding a better man.

Can they forge a business merger and a personal one
too?

Diamonds. Billionaires. Who knew working undercover would be so sexy.

The Billion Heir by Nikky Kaye

Welcome to the first meeting of the Billionaire Book Club—because even the wealthy need help to read between the lines.

A seduction. A secret. A steamy, snowbound adventure. 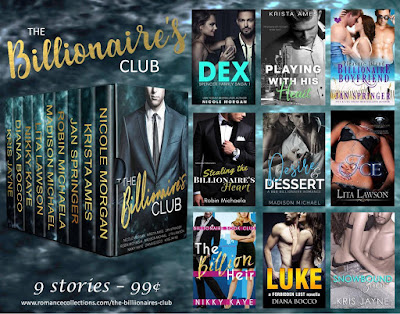 Vengeance is Mine by Kat Henry Doran

Vengeance Is Mine
a contemporary romantic trilogy
by Kat Henry Doran
Kat Henry Doran has put together an incredible list of prizes for this tour. They are just beautiful! Please use the RaffleCopter below to enter. Join us on an exciting tour of great blogs to read more about Vengeance Is Mine, interviews, and guest posts. Remember you may enter every day for a chance to win the prizes. You may find the list of tour location here and you will also find pictures of the prizes here too. 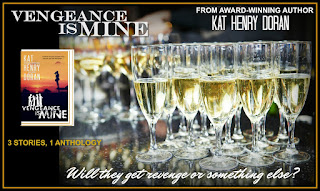 Ever think about going back to study hall to face down the school bully? The mean girls? The brainless jocks who made your life a pure misery? For Dru Horvath, gypsy orphan turned Pulitzer Prize winning photo-journalist; Rafe Archangeli, Scourge of Summerville who now heads a multi-million dollar trust; and Fiona “Fat Aggie” Thorpe who recreated herself into an A-list model with her own A-list agency, the opportunity to exact revenge is too good to pass up. Will they find the vengeance they crave? Or something more valuable? 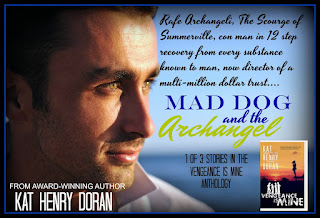 “Tough way to find out about the other woman.”
“Other woman, hell,” Dru groused. “The assistant was some young stud from Tommy's gym with abs to die for.”
With that. she side-stepped him and reached for the knob on the bathroom door.
Fast on his feet, Rory's counter move brought them nose to nose. “Play much poker, Horvath?”
“I don't know what you mean.”
“Before you started trash talking the cheating ex-husband, your face lit up like the Fourth of July. That tells me you've got something stashed in the tote. Until you let me look inside, it stays out here.”
Clutching the canvas tote to her chest, she sneered, “The only thing in here is my outfit for tonight's event. If you think I'd go naked, one of us is a couple fries short of a happy meal.”
His response came in the form of another gimme motion with those thick, blunt fingers. “How about I close my eyes if I encounter any lacy unmentionables?”
“As if.”
She knew the instant he found the back-up phone. The screw-you look morphed into a smirk. “It's not smart to mess with Homeland Security, sweetie. Those guys eat small rodents for breakfast.” 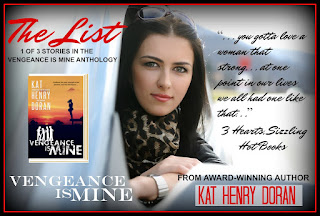 Legal nurse consultant, victim advocate, sexual assault nurse examiner Kat Henry Doran and her alter ego, Veronica Lynch, has been there and done that--many times over. She often travels to the wilds of Northern New York State, witnessing the wonders of mother nature at her best. From the shores of Lake Ontario and the Saint Lawrence River to the historic Adirondack and Catskill Mountains, she creates stories featuring strong women and the men who love them. When not writing, she can be found lashed to one of her sewing machines--or chauffeuring the four brightest stars in her life: Meredith and Ashlin, Owen and Kieran. For more information on Kat and Veronica, go to: 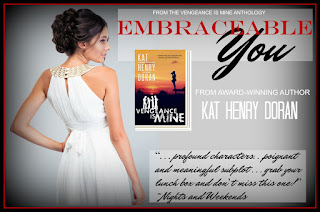 Email ThisBlogThis!Share to TwitterShare to FacebookShare to Pinterest
Labels: Giveaway, Kate Henry Doran, Reviews by Crystal, Vengeance is Mine

Now Available in Audiobook and Paperback: Genie’s Awakening by @JewelQuinlan

Visit Reverie Resort, a luxury hotel on a tropical island where vacationers come to enjoy their wildest dreams but get more than they ever expected…

Genevieve, a Jinn, comes to Reverie Resort for one last vacation before she must go before the Afrit tribunal and formally declare that she has no powers. She hopes to enjoy one last taste of a luxury beyond even what she is used to before being cast out of her own dimension to live among humans.

But something goes wrong. Instead of the spa weekend she's expecting, she finds herself on a remote, barren planet being auctioned off to the highest bidder and has no way to contact her hosts to correct the situation. Is there really a mix up? Or do her hosts have sinister intentions toward her? In the meantime, she finds her new owner, Colin, to be quite attractive for a human...


Where to buy the audiobook:
Audible  |  iTunes  |  Amazon
Get the paperback version on Amazon

Want the ebook instead? Get it here:
Amazon  |  iTunes  |  Kobo  |  Nook
Add it to your shelf on Goodreads
************************************************************
Prefer to try for a FREE copy? Enter the Rafflecopter giveaway HERE
Jewel is giving away 10 paperback copies and 10 audiobook copies of Genie’s Awakening
The Rafflecopter runs from 5/28 through 6/10
************************************************************
Enjoy this excerpt:
Will turned to address the men again, but did not release her from his grip. “Have a good look at this beauty, gents.”
As they gawked at her, she stood straight and proud as though daring someone to try and claim her, returning their gazes with scathing, cold eyes, her fair lips pressed into a tight line. After one quick scan of crowd before her, she shot an icy glare at Will, who let go of her and backed off.
Colin chuckled. Could this petite thing be the reason for the bruise on Will’s cheek? She radiated anger, was so alive with it that it cast off her like the heat of a flame.
Will strolled to one corner of the platform as though nothing dramatic had just occurred. “Now, where shall we start the bidding?”
“What skills does she have?” asked one of the men.
“Yeah, can she work a terminal?” asked another.
“A bit scrawny for farm work. Looks like the most she’d be able to do is keep the house clean,” someone else commented. That was followed by snickering from the cluster of men around him.
The woman tossed her head and the dark strands of her hair gleamed onyx in the light of the double suns. “I do not do menial labor.”
She reminded Colin of warrior princesses in tales. And it was obvious to him that she was unused to being handled the way she was right now.
The trader wagged his eyebrows and strolled to the other side of the platform. “Who cares what skills she has? Come now. Let’s start the bidding. With a woman of this quality, why would you ever want her to leave the bedroom?”
The deep multi-toned chuckle of men followed his statement. But Colin wasn’t among them. Instead, he frowned, and started making his way forward to end the show.
“Who will give me twenty credits?” the trader shouted. “Twenty credits for the loveliest creature you’ve ever seen.”
The woman stood with her head held high, eyes distant, stance hard as the rock that formed the distant red mountains of Garrulus Four.
The men shuffled and murmured amongst themselves. Given the kind of lives they led, beauty was a luxury far outweighed by the many other qualities they needed in a wife. This lot of men were used to leading quiet lives, and they wanted women who did the same or went along with it at least. The woman on the platform would not fit in with this plan. Even if one of them could afford her, Colin doubted they’d be able to handle her.
Will’s eyebrows were high with shock. “Nobody?” He stopped his movement on the platform and pulled his head back in an exaggerated way, making his potbelly poke forward from the coat he wore. “No one will pay twenty credits for this gorgeous creature? That’s a bargain for someone like her.”
Colin saw one corner of the woman’s mouth quirk upward in satisfaction, and he grinned again. Obviously, she felt like she was winning so far, but what would be the consequences? She’d already stated she wouldn’t work, and she’d failed to declare any skills. If all she had to trade was beauty, she was on the wrong planet.
“Eighteen credits then. Who will pay eighteen?” Will called, an edge of desperation in his voice now. “You’ve all become shy suddenly. Suffering from performance anxiety, perhaps? Who wouldn’t be with her around, eh?” He chortled and leered at the woman.
Colin could see the men glancing at each other. Who would be crazy enough to take on the beautiful spitfire? That’s what it came down to, their masculinity. Clearly they found themselves lacking, because none of them were brave enough to bid.
As the silence stretched on, a warm wind whooshed through, audible in the vacuum of stillness. It was only then that the woman’s stance thawed. Her shoulders rounded, and worry transformed her eyes from their sparkling glare to the round-eyed, lost look of an innocent. The pink lips softened and parted revealing surprise at the group’s rejection, and Colin’s heart went out to her.
“Eighteen credits!” His hand shot up in the air before he even realized that the words had left his lips.

Jewel Quinlan is a bestselling paranormal and contemporary romance author. Since her debut in late 2013, she has published sixteen stories and has many more to come. Restless by nature, she is an avid traveler and has visited sixteen countries so far. Lover of ice cream, dark beer, and red wine, she tries to stay fit when she’s not typing madly on her computer drafting another romance novel. In her spare time, she likes to do yoga, hike, learn German, and play with her spoiled Chihuahua, Penny.